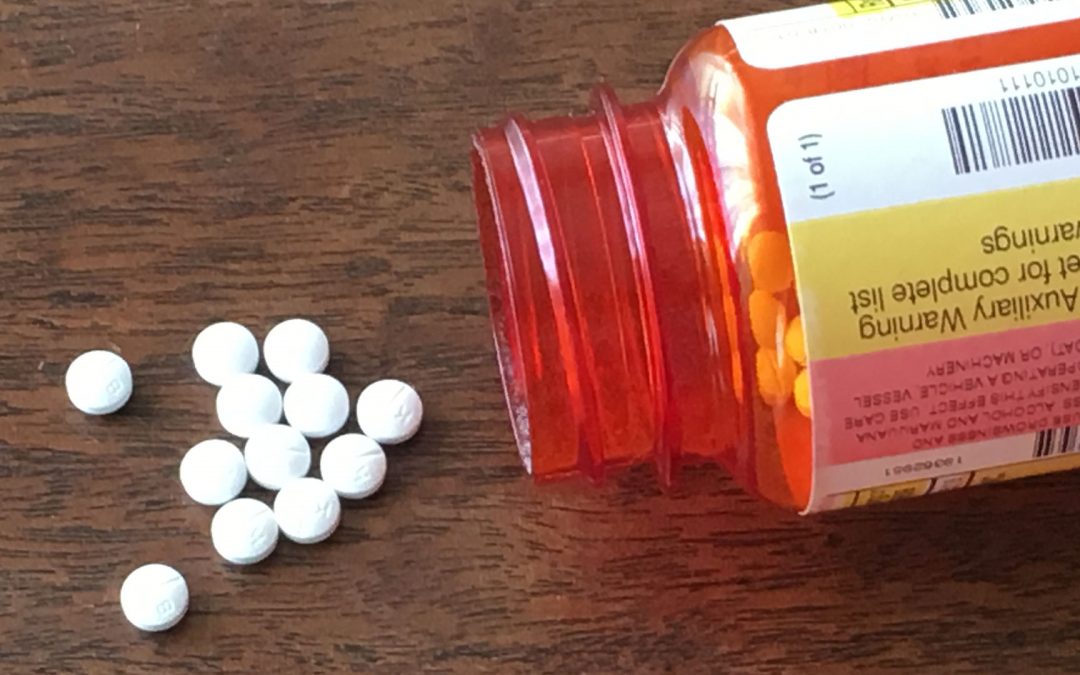 During the Summer of 2019 I had my right knee replaced.  As part of my pain treatment I was prescribed OxyContin.  After knee replacement surgery there is a push by the health practitioners to get you out of bed and back into your normal life as quickly as possible.  It is my opinion that as long as you are taking OxyContin an attempt at a normal life is more vague and ghostly than real.

In the early part of the knee replacement recovery process you are supposed to take pain medication ahead of the pain.  This meant you were on a schedule of Oxycontin every few hours.  I was taking a very small dosage.  Using the drug interfered with normal sleep but so would the pain so there were few choices.  In the weeks that followed I started to reduce the amount of Oxycontin I was taking.  I stayed on a schedule but cut the pills so I could take an even smaller dosage.  Then I changed the schedule by lengthening the time between the reduced dosage.  Within 6 hours of taking a dose I began to experience withdrawal symptoms; abdominal cramping, muscle cramping, anxiety, and I felt like I had the flu.  The anxiety was intense and sleep was impossible.  This went on for several days.  I then went cold turkey, no more Oxycontin, and after about five days I was finished with the physical withdrawal symptoms but not the haunting affect of the drug. I understood why people would become addicted to OxyContin.  I reached a place where I felt like I would do anything to get relief and that meant going back on the OxyContin.

While I was taking OxyContin I noticed many changes in my body’s functioning, my emotional state, my thinking processes and my subtle energy fields.  Some energy systems became really constricted and others became over activated.  The same was true with the effect on the physical body some parts of the body became over activated and the function of others parts was severely reduced which created other issues.   At times I experienced emotions that were the antithesis of my normal way of being.

OxyContin has the energy of a hungry ghost.  The hungry ghost is a tradition in Buddhist and Taoist cultures.  There are several versions of the hungry ghost lore.  The one I am referencing here is a vengeful spirit that is never full and can never be satisfied.  The energy of OxyContin is never satisfied and it brings suffering.

An entity, thought form, is created by the energy of the Oxycontin and the release of dopamine.  The entity thrives on the euphoria of the brain from the dopamine release.  The Oxycontin entity exists for the sole purpose of getting another release of dopamine into the brain.  The body exists for the purpose of providing the means for taking in the Oxycontin.  That euphoria provides a sense of safety.  During the post withdrawal period I was having a difficult time sleeping.  It was 2 a.m. and I had not been able to fall asleep.  As I lay there feeling really frustrated I heard a very clear voice in my head say “Go get one of the little white pills”.  I was startled by the voice and it’s message.  I Remen Q’d the state of non-peace created by the thought form and managed to fall to sleep.  The thought form has not returned.

While I was writing this article there was another “energy of a certain quality” as Master Choa Kok Sui, founder of Pranic Healing,  would put it.  I felt a drag on the writing.  I felt something holding me back from analyzing the impact this drug had had on me.  When I sat with what I was feeling I sensed a gray blanket over my being.  When I questioned its source I understood it to be a relationship to the collective OxyContin addiction.  Again I used Remen Q to transmute the state of non-peace.

During the writing of this article my knee was feeling a bit achy.  I opened a Reiki session.   My hands became very warm and began to quiver with intensity as the energy moved through my hands and into my knee.  During my convalescence I did a periodic Reiki session on my knee.  The effect was minimal.   I was reminded of something Mrs. Takata, the Reiki Master that brought Reiki to the United States, was quoted as having said “You cannot mix your energies”.  At the time she was referring to one of her students who had ordered a glass of wine at dinner.  I am certain that this statement would apply to anything that altered your awareness and the use of Reiki.

7th.  OxyContin creates a feeling of euphoria with the release of dopamine in the brain.  This rewires the brain.  This rewiring creates the desire to keep that feeling of euphoria.  This euphoria created a sense of disconnectedness with the world and people thus creating duality.  The euphoric experience alienated me from my body so that I could experience the effects of the drug.  I had no awareness of the connection to the wisdom of the soul through the heart during the use of this drug.  The drug superseded those connections and left me with little motivation other than being in the present euphoria.  Mental reasoning and tasks that required focus were impossible.  My thoughts were more like a bag of wet cement than the usual acuity I was familiar with.

6th.  I experienced an over activation of my intuitive energy centers, the information received through the third eye chakra is different from the heart and crown chakras,  while experiencing the euphoria phase.   I have always instinctively balanced my intuitive centers with day to day living.  I would intentionally activate those centers and access information in a directed and requested manner.  My ability to control the level of activation was being overridden by the affect of the dopamine release.  I would become aware of information that was unnecessary and mental clutter.   The problem with intuitive information received while under the influence of Oxycontin is that it is coming through a filter of Oxycontin and I was not in control of the flow of information.  For example: I would know when someone was hungry or I would be aware that they had not eaten breakfast.  This was not harmful but it was also not helpful.  Going into a public location like a grocery store was overwhelming because of the flood of mundane information.

5th.  When the dopamine levels reached the euphoria state I would feel the need to talk, the words had a manic quality to them.  I would endlessly talk.  The throat energy center was being over activated by the dopamine release.  The throat center was taking its direction from the thinking mind and the thinking mind had gone into a pleasure seeking ramble.    Reading was an impossible task.  I had no desire to read a book.  I had no desire to watch television.  One evening, while under the influence of Oxycontin, I read the same paragraph at least a dozen times before I gave up reading.  I could not focus on the words in front of me.  I had zero retention.  That was true the entire time I was using OxyContin.

Creative expression was blocked.  I had set out a stack of sewing projects prior to my surgery.  I theorized that I could at least make baby receiving blankets.  I had no desire to get near my sewing machine.  I also paint and that did not happen.

4th.  Feelings are distorted.  My heart did not accurately interpret information to create appropriate responses.  I had a sense that I could not trust or know the heart.  My head took over the concept of trusting.  My feelings were superseded by what my thinking mind was experiencing.

3rd. I quit experiencing joy outside of the effect the Oxycontin gives.  I had no power to create enjoyment. My entire being existed only for the purpose of being there to take the next dose of Oxycontin.  The only joy is what is allowed by the Oxycontin.

There was no desire to interact with others.  During the period of time I was using OxyContin I turned down several invitations from friends to meet for coffee or lunch.  I can remember thinking that leaving the house would mean that my OxyContin schedule would have been disrupted.  That schedule dominated my life.  I manipulated my dosage so that I could do my physical therapy.  That may sound benign enough except I can remember feeling anxious around how soon I could take a dose.  That OxyContin dose was the focus of my thinking hours before the actual appointment.  The OxyContin was creating an identity outside of the actual pain I was experiencing even as I weaned myself off of the drug.

2nd. I experienced a reduction, stopping, of momentum and desire.  There was no desire to create.  There was no desire to get things done.  Creative energies were impaired from flowing.  During this period of time I found it difficult to even write an email.  It wasn’t until I had been off the Oxycontin for two weeks that I was able to write again.  Then the experience was like someone slammed a door open and yelled “I’m home”.

1st.  The mental disconnectedness mentioned above also applied to the body.  While in a state of euphoria it felt as if I was another being outside of me.  This was a state of being ungrounded.  This energetic disconnection created continuous muscle cramping in both of my legs.  The feeling of disconnectedness creates a sense of purposelessness and depression.  There was nothing that I wanted to do except lay on the couch and take my drugs.  I had no appetite and I was losing weight (You need protein to rebuild tissue.  You need a healthy diet to keep your immune system and energy levels at optimum levels.).

Much has been written, especially in the last decade, about the effects of Oxycontin use on communities, families, and how the drug creates addiction.   Addiction to this drug has created long lasting scars to many communities across the United States.  A preponderance of use and overdose deaths in the United States are focused in Rust-Belt communities where there is high unemployment that spans generations.  Opioid addiction is called one of the diseases of despair1.  This population feels hopeless and economically stressed.  The impact of opioid addiction to economically stressed states from 2015 through 2017 shows an almost vertical increase in overdose deaths and addiction2.  An addicted population won’t stand up at political rallies and demand health care.  They won’t demand clean water and air.  They won’t demand better schools.  The population of people addicted to opioids is growing.

I am reminded of Aldous Huxley’s book “Brave New World” where the use of a drug, Soma, would render someone docile who had negative emotions, pain, discontent and the potential for causing trouble.  These people were feed a steady dose of Soma by the government.  These people turned into “slaves” of the state.  Is OxyContin the new world Soma?

Note:  This article was written from the perspective of my experience with Oxycontin on  energy centers, emotions, mental capabilities as well as my physical body.   This does not imply anyone else will have this experience.  During the use of this drug I felt a heightened awareness of the impact this drug had on creating imbalances in my body.